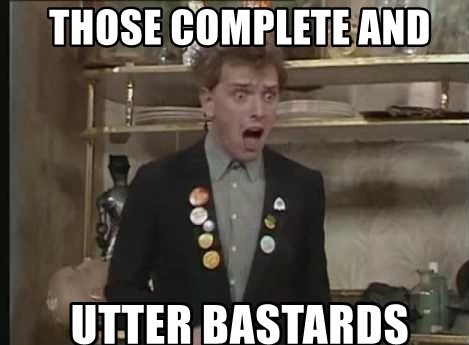 May 14, 2018 chromechroniclespoleblog All about the pole tricks, Funny posts 6 comments

Arch-nemesis moves, we all have them. I don’t mean moves that take a couple of attempts to nail here, I’m talking about tricks that take months, if not long, painful years before you finally master the fuckers (hence the name arch-nemesis instead of just a regular nemesis). They’re your Kryptonite, the Joker to your Batman and the general shit stain on your otherwise (relatively) pristine pole adventure.

As someone who is about as flexible as a lamppost, the majority of my utter bastard nemesis moves involve a degree of flexibility that my poor old concrete body just doesn’t have (yet). Maybe one day I’ll hopefully nail these bastards, however in the meantime, I have chosen to rant about them below. Yes you have permission to laugh at me here, as some of these moves aren’t even technically classified as that difficult!

Now don’t get me wrong, the Allegra in all of its many varieties is a move that looks stunning. It’s fab for creating and showing off strong lines, flexibility, and generally making the audience go “oooooh!” when they see a perfectly executed one. However can your girl over here perfectly execute an Allegra? CAN I FUCK. Whenever I attempt even a basic, open Allegra, I fail spectacularly. I cannot for the life of me get the twisty action right, my ribs get all in the way and overall everything just ends up being a half open, pinching, and burning mess. As a result of my many Allegra fails over the years, this move has also been pushed to the bottom of my practice list, which means I haven’t actually got any better at it. Way to go Eilish that was a fucking smart idea wasn’t it?

Again, this is another move that looks badass, just not when I attempt it. My Stag practicing ritual goes somewhat like this; watch a Stag be executed perfectly whilst gawping in amazement, attempt a Stag from the floor and sort of loosely assemble to correct position, get a wind of confidence from assembling said loosely correct position, attempt a Stag up the pole and fail miserably. DAMN IT I AGAIN JUST CAN’T MASTER THE TWIST ACTION! I have the shoulders of a ninety year old sedentary pensioner that feel like they’re about to pop out of their sockets whenever I attempt a Stag. In addition, my crusty old hip flexors don’t allow for my back leg to be lifted up very well if at all either. All in all my version of the Stag ought to be re-named the Mess.

This tale has a slightly more positive start to it, as since my previous blog on this prick of a trick, I can actually execute one now if I really put my mind to it. However, I only have one solid method of getting into the Superman, which is a sort of backwards shuffle walk onto the pole, hooking my legs round, thrusting my pelvis down into the seventh circle of hell and hoping for the best. It works, and I can get into the trick, but it’s about as graceful as a poo. How people put Supermans (and his insane sibling the Dove, which due to my aforementioned pensioner shoulders I haven’t even attempted) into routines so elegantly and with a smile on their face amazes me! Witchcraft that’s what it is, bloody witchcraft

Now, I honestly don’t mind a layback, in fact I could go as far as to say that I’m quite partial to a good old Cross Knee and Cross Ankle Release on a more than regular basis, but holy shit I swear learning them was one of the most terrifying experiences known to the human race. Even when you first learnt the buggers and you were sat pretty low on the pole, that moment when you first lean back feels as though you’re suddenly 500 foot high and you’re convinced that you’re going to go hurtling down the pole at 80 mph and break your neck. Spoiler alert- you’re legit not, but Jesus those first few layback practices are scary!

No no no no no no and no. I don’t care how awesome, fast and twizzely these bad boys look, whenever I attempt on I feel like I am going to go flying off the pole, crash into a heap on the floor and lose most of the skin on my top wrist. Great big, burny bitches I tell you! I am ninety percent certain the reverse grab spin was conjured up by Satan himself. Return back to the depths of hell reverse grab spin and stay firmly put there!

I am a very naughty pole dancer who really doesn’t train their other side anywhere near as much as they should. That’s completely my fault and I deserve a firm slap for it. As a result of this terrible training habit, I have my dominant side, which can plod along okay the majority of the time and bust out a few tricks (obviously not the ones mentioned above) and then I have my other, stupid, defunct tit-wank of a side which can just about manage a step around at best. I have learned from my mistake and am now training both sides as much as possible in the hope that one day they’ll be at an equal level. That day will probably be 15th September 2035.

Do you have any nemesis motherfuckers that aren’t listed above that deserve a good, solid ranting about? If so drop them in the comments!