You may recall back in March 2017, I wrote the first edition of the Foxen vs Flexibility blog, detailing all about how I was going to wage war against my Tinman back, hip flexors of solid concrete and shoulders that I’m pretty sure have moderate levels of Rigor Mortis. Well, a solid 16 months later, I can finally provide you all with an update on how Foxen vs Flexibility went;

I fucked the whole thing.

Yep. No two ways about it. Since March 2017 I stretched for all of about ten minutes in October. To give old Tin woman over here some credit, the previously mentioned qualification of doom that I had been studying for in muggle life had literally taken up the entirety of my fucking free time. There was no way in hell I was going to miss out on pole classes because of the fucking thing, so tragically the plans to become a bendy wendy had to take a back seat.

Well not anymore! I’ve had enough of my fuckass shoulders, upper and lower back and hip flexors that have been delivered to me straight from the seventh circle of hell themselves holding me back and hampering my pole progression. My dickhead of a qualification is now complete and my free time is once again my own, and I intend to spend it (well, the majority of it at least, its summer and there’s going to be a few piss-ups and inevitable hangover days on the horizon) wisely. It’s about time I stopped just stalking my super flexible pole idols Bethany Finlay, Felix Cane and Maddie Sparkle (to name a few) and actually got my arse off the sofa and onto the Yoga mat.

In the past week, I have actually managed to fit in two 40 minute stretching sessions, which for me is virtually unheard of! So mini progress is already being made! Well, I say progress, this is the absolute state of my flexibility so far. Shit on the bloody thing, I think I’ll need more than two sessions a week to sort this mess out. 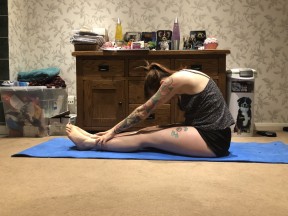 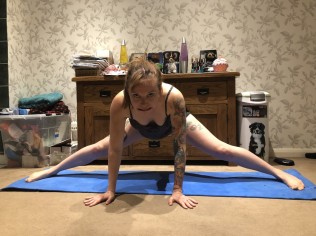 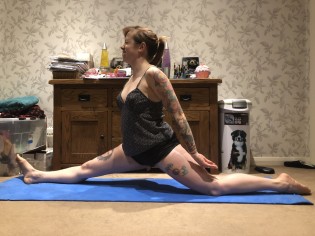 As you can see, I’ve got a LONG way to go before I could even stop referring to myself as inflexible. However, I once read one of those trite “inspirational” quotes on Instagram, which said something along the lines of “you don’t have to be great to start, but you do have to start to be great.” In all honesty, I do find facing my flexibility weakness quite daunting, as it’s my one main area of physical fitness which I suck at, but it’s time to pull up my big girl pants and conquer the bastard, you don’t defeat your demons by running away from them! This is (I think) the fourth time I have gone into battle with my stiff as fuck body, and this time I’m going to win.

As stated in Foxen vs Flexibility round one, the same rules still apply. I am solidly committing to stretching at least twice a week (ideally three times) for a minimum of 40 minutes a pop. I would love to stretch more, but life happens, and in my opinion, going from zero stretching sessions to even just two a week is already a solid improvement. I have seen plenty of awesome stretch classes, which I have heard nothing but positive reviews from my pole buddies who have attended them, taking place too, so I fully intend to dive into those head fucking first next month, which I am very excited for!

Also, despite it hurting like a motherfucker, I actually find I feel rather chilled and contented after stretching. My mental health has annoyingly been a bit of a cunt recently, so I’m hoping that up-ing my stretching regime will give that a bit of a boost too, which is never a bad thing.

So here goes, Foxen vs flexibility round two (lol, more like round four) has begun bitches. I am aiming to write a round three post around Halloween time, and will hopefully have a more positive and successful update for you all then, in the meantime, flexibility, LET’S BE HAVING YOU!

If you have been or are currently on a quest for flexibility, or have any useful stretching hints and tips, please drop them in the comments below!