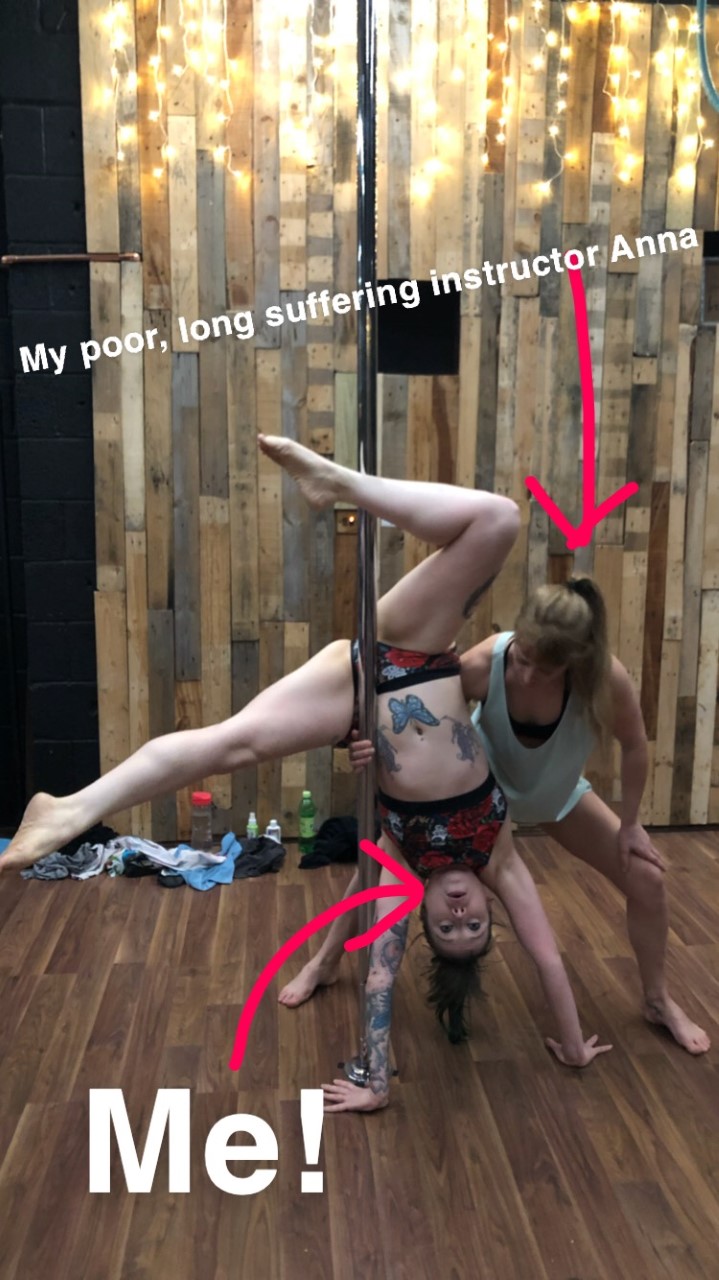 Oh Pole Instructors -where would we be without them? Well, we wouldn’t even be pole dancing to begin with! A good Pole Instructor boosts your confidence, makes the difficult and painful art of pole dancing fun and enjoyable to learn and has your back during the many terrifying, near death moments you experience on your pole journey (Laybacks you bastards I’m talking about you!).

However, fuck me these poor souls have the patience of saints. As much as being a Pole Instructor would be an awesome career, the amount of grief us students inflict upon them at times must get on their tits, and I am the first to admit that I am a pretty irritating student! Therefore, I took to the streets (well, social media to be precise) and asked my instructor buddies what the most annoying behaviours us students get up to in class are, to try and determine whether I’m guilty or not of committing them. So strap yourselves in dear readers and prepare for some potentially hard to swallow pills…

Having a bad attitude

“Don’t come in with a defeatist attitude. It really gets me down. Like, I have a life too. Please show up to put in work. It’s exhausting otherwise for the instructor. Don’t look and act like you don’t want to be in class.”

“What gets my goat the most is students complaining and dragging everyone else’s mood down because the class isn’t going their way. Suck it up! Be happy for everyone who is having a great class and punch a pillow at home if you need to!”

Verdict: I’m ashamed to say that I’m very slightly guilty of this behaviour once in a blue moon. Although more often than not it’s never pole that puts me in a shite mood, but occasionally, if I have had a tough day at work before class, or Bristol’s delightful public transport system has let me down once again and I’ve made it to class with minutes to spare, then I can be a bit of a moody cunt when I rock up to class. Usually though pole and my awesome squad sort me out and I’m right as rain again soon enough, ready to give it my all and attempt to bust out what we are being taught. And as far as I’m aware (I sure as fuck hope not anyway) I haven’t dragged anyone else’s mood down because I have had a tough class! I have definitely gone home and had a cry before now if I’ve had a particularly hard class, but I’ve kept a brave face on whilst in the studio – promise!

Teaching other students what to do

“Teach other students what to do and attempt tricks that are beyond their capabilities.”

“Teach each other too much. A bit is fine if it’s what has already been taught and is just making the same points as a reminder.”

Verdict: Absolutely not guilty. Lol I am barely confident in my own abilities when it comes to the whole learning new tricks malarkey, never mind having guts to get up there and teach my peers what to do! If it’s a move that I feel very confident in, like my beloved Cross Knee Release, Jasmine or Gemini, then I will by all means help to spot, give pointers and assist my buddies, but if it’s a move I have no idea about or cannot do, then I sure as shit am not going to be responsible for someone injuring themselves because I gave them sloppy advice. Always ask your instructors for help if you need it kids!

“Peel off their skin / chew their nails and leave them on the floor. Leave rubbish in the studio -especially plasters.”

Verdict: Not guilty you dirty fuckers! Seriously you can’t go around leaving bodily mess, or mess of any kind for that matter in the studio! Yes on occasions my nails have broken and I have ripped of scabs and various other bits of flesh whilst attempting certain moves, but I have always stopped and put whatever bodily shrapnel I have created straight in the bin, not left it scattered about the studio. And do not even get me started on that pure minging behaviour of spitting on your hands for grip. That shit is nasty! Let’s all make an effort in 2019 to be good students and not leave any mess of any kind in studios, or gob on our hands for grip like bloody animals.

“Talk over the teacher when she/he is demoing and then ask them to do it/explain it again.”

“Talk when the instructor is talking!”

Verdict: Guilty as charged. I am a terrible, terrible chatterbox and occasionally I have interrupted my instructor before now when I have got over-excited about a move, or massively confused by one too. Seriously as a kid I was in trouble most often at school for talking in class and being noisy when I generally shouldn’t be, and it looks like adulthood is no exception! I’m aware I have been too much of a chatterbox and general class clown at pole class, which is something I definitely need to work on before I get a wallop.

“Not join in with drills for no reason.”

“Moaning about being cold/slippy instead of putting that energy into warming themselves/the pole up.”

Verdict: Not guilty over here! I come to pole class to get a sweat on and burn some energy and improve my abilities, which I sure as fuck won’t do if I’m stood around doing bugger all. Getting a solid warm up nailed is vital for my performance in class, as I’m sure it is for everyone elses and, as much as the bastards hurt and make my abs feel like they’re about to erupt through my flesh, drills and conditionings are essential for your pole progression too. Skipping your warm ups, drills and conditionings isn’t going to hinder anyone’s progress but your own, and then you’ll be whining about not being able to do moves, so don’t play yourself and skip them!

Not getting your arse to practice

“Making excuses not to do certain drills/tricks without even having a go because they think they can’t do it.”

“Ask how to make something “pretty” and then groan when I say “practice.”

Verdict: Not guilty anymore! I have always managed to get pole practice in relatively regularly (usually once a week on average), however I would often avoid practicing my true, nemesis moves and would instead chuck them in the fuck it bucket and practice moves I could get a pretty picture of for Instagram instead. Well not anymore! In 2019 I have been practicing at least one nemesis move (currently focusing on the Superman and the Allegra) at each practice session until the bastards are nailed. They hurt like hell and currently look awful, but small progress is being made! It’s true I was once guilty of crimes against Pole Instructors by not practicing my nemesis moves, however I am pleased to announce that I am now a reformed character with this one.

“Wearing jewellery that connects with the pole.”

“Refuse to take rings off. oh sorry it’s my wedding ring it won’t come off’, I couldn’t care less if it’s the queens jewels you’re not scratching my damn pole with it!”

Verdict: Not guilty. I’m completely innocent of this one. Well, I leave my belly bar in, but that doesn’t stop me poling as I haven’t yet used my belly button to grip the pole anyway. I don’t think I’ve even worn a pair of earrings when pole dancing, mind you I’m not much of an earring wearer anyway. Anyway, I digress, jewellery on the pole is a no from me.

Are you an instructor who has a pet hate that hasn’t made it to the list? If so drop them in the comments!